Oduduwa Republic, the group agitating for the independence of the Yoruba nation has just unveiled a new currency for the proposed Yoruba split from Nigeria.

The group posted the image of the proposed currency on its Oduduwa Twitter handle. The Oduduwa National Currency shall be called ‘𝗙𝗔𝗗𝗔𝗞𝗔’ meaning Silver.Sahara Reporters had earlier reported the declaration of the sovereignty of the Yoruba nation by Yoruba historian Banji Akintoye and freedom fighter, Sunday Adeyemo Igboho.

Prof. Akintoye asserted  that “this is not a time to discuss restructuring, resource control or a new constitution. but rather to secede. The Yoruba nation can be independent and thrive.”He urged all Yoruba people living in other parts of the country to return to the South-West.

“We are ready to challenge a country that has nothing for the Yoruba people. Fulanis are cheating us. No Yoruba person holds a major political position in Nigeria, this is the 14th year a Yoruba man was the Inspector-General of Police, no Yoruba man was ever a Chief of Army Staff. Instead, they gave us the position of Vice President that cannot make any major decision. All Yoruba citizens are in support of our move.”

There is no clear indication yet that the Biafra groups will follow this move and introduce their own Biafra currency. They have to first present a united front.

The Nigerian Guardian last week reported that some concerned Igbo professionals accused the leader of the Indigenous People of Biafra (IPOB), Mazi Nnamdi Kanu, of changing the registration status of the proscribed group in the United Kingdom (UK). They claimed that Kanu’s agitation for the realisation of the Republic of Biafra was “anything but altruistic, and more for personal gains”. 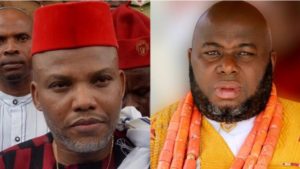 Nnamdi Kanu and Asari Dokubo
Another faction Biafra Nations League, BNL, National Leader, Princewill C Richard, has berated the Nigerian Chief of Naval Staff, Vice Admiral Awwal Gambo for deploying the military to the Gulf of Guinea. BNL, has its operational base in Bakassi Peninsula in the eastern end of the Gulf.

Economics, business, politics and factionalism are all in this latest dance in the world’s largest black nation.Are these the signs of an upcoming storm  in Nigeria’s worsening security situation, or would these disagreements be fleeting? Time will tell.

No Canadian experience? It can be fixed.